Welcome to the Cirrus Flyers Group

The objective of The Cirrus Flyers Group is to provide economic recreational flying for its Members but at the same time provide an environment for learning and social flying whilst enjoying a modern, state of the art Aircraft. 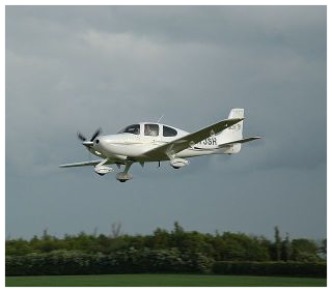 Based at Turweston (EGBT), the group fly from a friendly aerodrome with hard and grass runways which initially was home to Vickers Wellingtons and Avro Ansons of RAF 12th Operational Training Unit (OTU). Later B-25 Mitchells of 13th OTU arrived and finally Nr. 17 OTU Gunnery flight formed in July 1943. Today Turweston is home for a number of businesses as well as providing a base for the Light Aircraft Association. 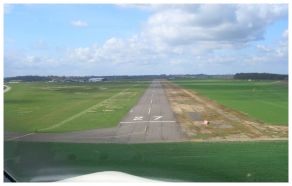 All our members book the aircraft in advance using the groups on-line booking system: aircraftbooking.co.uk

Last year was busy with the aircraft averaging 35 hours in the summer months and 10 in the winter months.

The new engine is running very well with low oil consumption which is very likely the result onf being correctly run in.

A few member changes with Rob and Apos selling shares. We also bid farewell to our long Standing Chairman, Peter who decided to sell his share. Our thanks go to Peter for his pragmatic and friendly chairing of the group. Harry was elected as the new chairman at our recent AGM and we look forward to seeing if his taste in red wine is up to the same standard as the previous incumbent.

The group welcommed Scott who was one of the aircraft's original owners and Steve D who is returning to GA flying after deciding that B747s are not nearly as much fun.

Whilst 2018 was one of the best summers in recent years, sadly for CIRI it was not!

Having recently having had a top end overhaul, and upgraded starter motor, a hairline crack was spotted on the crankcase. Following research from Neil T and committee members it was deemed a common flaw that can occur on this specific model/ casting on Cirrus engines. Sadly for CIRI it meant being offline whilst a new engine was fitted. After a lot of haggling from Neil T with Continental regarding goodwill contributions a fully overhauled engine (with design improvements/ modifications to the casting) from the factory was ordered. Sadly this all occurred during prime weather and the holiday season, when many of us would have liked to go on various trips.

However, on a positive note going forward we now have a brand new zero timed engine fitted by our friends at AKKI and tweaked by RGV, with even hot starts being a distant memory, as the upgraded starter cranks the prop at a much higher rate.

Autumn weather has been kind to us and many of the members have taken advantage of this and executed some great trips. Retford/ Gamston bread run proving very popular!!!!

Here’s to 2019, a happy Christmas and safe flying New Year!

Three new members joined recently so a warm welcome to Robin, Richard and Rob. We say farewell to Chris and Neil S both of whom sold their share with some reluctance. The third share came from Apos reducing his holding from two shares to a single one. Plenty of hours flown in the last 18 months with Neil taking over from Dave as the Instrument Rating Training gluton for punishment. Hard work single pilot, no autopilot, IFR which Neil T reckons is a lot easier in a large airliner, so the training is very relevant. Recent servicing carried out at Akki involved a complimentary clean and polish which provoked some comments about how good CIRI looks at 11 years old. Lots of interest in share purchase recently which highlights what a friendly and well run group this is.

CIRI will celebrate her 10th birthday in 2017. The aircraft looks and performs very much as she always has with the only notable event being the scheduled refurbishment of the parachute system which must be completed every 10 years. We say hello to another new member, Neil Tayler, who recently purchased a share from Nicola May. Neil (the second Neil in the group, just to confuse the treasurer) is a long haul Airline Pilot who has rekindled his interest in flying things slightly smaller than the day job on B777. We say goodbye to Nicola May who sold her share with great regret, but needed to focus on other commitments. Dave Topp has been flying more than everyone else combined recently in the run up to his Instrument Rating Test. Congratulations to Dave for passing the test, despite having been scuppered on a few occasions by the British weather. Strange conundrum that you need good weather to do a test which allows you to fly in bad weather!

The last few months have seen some changes in the group, we said goodbye to brothers Nigel and Scott Birrell who were members since the group formed in 2007. This means we have new members to welcome in the form of Nicola May and Neil Scarborough.

Nicola bought herself a trial lesson in a C152 from East Midlands in 1990 and loved it. Being a student at the time and then a career came along she set herself a goal to obtain PPL. In 2012 both the time and money came together and a few months later she was the proud owner of a brown plastic license having learnt in a C152 and then passed the skills test in a Piper Warrior. Since then she has added a blue plastic license with an IR(R) to her collection! Nicola's other pastime when not earning the money for more flying hours are skiing, which looks to be another expensive hobby!

As both Nicola and Neil are fairly new to Cirrus we had the inevitable round of discussions with our insurers and as a result we revised the group rules to cover the introduction of low hours Cirrus Flyers. We believe this has changed things for the better and welcome them both to the group.

Seems an awful lot to report since the last web site update but here goes! Derek has left the group to play with a dog, well a Bulldog to be precise. We were sad to see him go but every cloud has a silver lining and our came in the form of Apos Katrantzis. Apos had joined the group a while back after purchasing Nick Evan's share but cemented his position by purchasing Derek's share to bring his total number to 2. Apos is a real frequent flyer - using CIRI for business and pleasure.

Stephen Coles joined our merry group during October. Steve is very experienced pilot initially joining the Royal Air force in 1969, having previously joined the University Air Squadron in 1965. He saw the light in 1975 and became an airline pilot! He eventually retired 2 years ago having risen to the exhualted rank of Fleet Manger (Technical) and introducing CAT3b to his Fleet. Seems a worthy member of our Group and an ideal chap to take over technical issues from Derek!

Geoff Carter has joined our group, having purchased a share from Nick Taratt. Though Geoff is not an experienced SEP pilot, he has lots of experience flying his microlight and is currently converting onto Cirrus with instruction from Dave Topp (our friendly FI) and CUK. He has seen the light! Geoff also has a share in a RV9A, a sporty little number.

After an extensive upgrade during the terrible weather of last winter G-CIRI has at last emerged from the hanger and ready to fly! Just in time for the good weather. We took advantage of the long layoff to fit a new propeller, zero life the engine, update the avionic software and teflon coat the paintwork. We also brought forward the Annual so that it did not interrupt our summer flying. In short, we now have effectively a brand spanking new aeroplane.

To simplify recording of flight times we have launched a new on-line log book where group members can record their hours of flight. Thanks to Steve Clarke for his help in creating this for us.

Derek Sharp has purchased Graham's share. Derek is a highly qualified and experienced pilot. He joined the RAF is 1964 and retired almost 40 years later. In his time he has logged over 10,000 hours of which 650 are IMC and 2000 instructional. Jets flown include the JP3-5, Gnat, Canberra, Jaguar, Hawk, Phantom, Jetstream, VC10, B737 and numerous single engine piston aircraft.

Besides flying Derek likes motor racing, computers and writing. He is the author of the book "An angel on my wing" which records his experiences in the RAF including a 500 mph bird strike and his fight back to fitness and PIC.

We welcome Derek to the group and thank Graham for his hard work and dedication over the past 18 months.

After quite a long wait the warranty paint work repairs were undertaken and the aircraft was then given a full Valet and a protective paint sealant applied. The aircraft now looks better than new. Our thanks to Propwash for a great job!

Last nights meeting confirmed the appointment of Scott Birrell as Chairman taking over from Peter and Dave Topp as Treasurer taking over from Graham. We thank all involved in running the group for their past help and welcome the new committee members.

Chris and Simon flew down to Gloucester with Nick in an SR22-G3 Turbo and collected G-CIRI from RGV after the retro-fitting of a Bendix/King DME unit. The picture below shows the unit neatly fitted to the left of the PFD. The addition of this unit will allow suitably qualified pilots to operate the aircraft in controlled airspace under IFR. 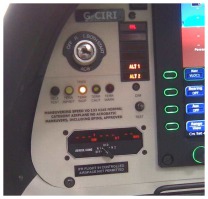 On the way back from Bembridge today our aircraft was forced to make an unplanned landing at RAF Benson due to extreme engine vibration and abnormal EGT/CHT readings on Cylinder Number 2. The fault was later traced to a double plug failure in that cyclinder, something considered to be extremly rare. The plugs were replaced and after thorough ground runs G-CIRI was back in the air.

Pat Pearse, a founder member of our group, has sold his share in G-CIRI to Steve Clarke. Pat worked tirelessly to set the group up and to get it through the early months. We wish to sincerely thank Pat for his efforts and wish him well with his new venture.

Chris has resigned as Chairman due to his relocation to South Africa for the next few years. Peter Jenkins has taken over from him. Alastair has also handed the job or treasurer over to Graham Horne due to his increasing workload and extensive travel.

We welcome Steve to the group and wish everyone success in their new roles.

G-CIRI is booked into RGV for a 50 hour check on Wednesday 2nd January 2008 and will be back there again to have a DME fitted during the week commencing 11th February. The following week (w/c 18th February) we are having some warranty work done on the paintwork by Mick Allen and Son, who are also based at Turweston.

The aircraft will be unavailable during these weeks.

Welcome to Harry Cole, our final group member. Harry has been a regular face at Turweston for a while and is looking forward to getting familiar with the aircraft.

Steve Moore our latest recruit took to the air today following succesful check rides with both Scott Birrell and Simon Braithwaite. We would like to welcome Steve on board and wish him all the best for the future. Steve was a frequent visitor to White Waltham where he did most of his flying. He joined the group having already completed his SR20 and SR22 Cirrus Approved training at TAA Denham.

Visitors to this site: